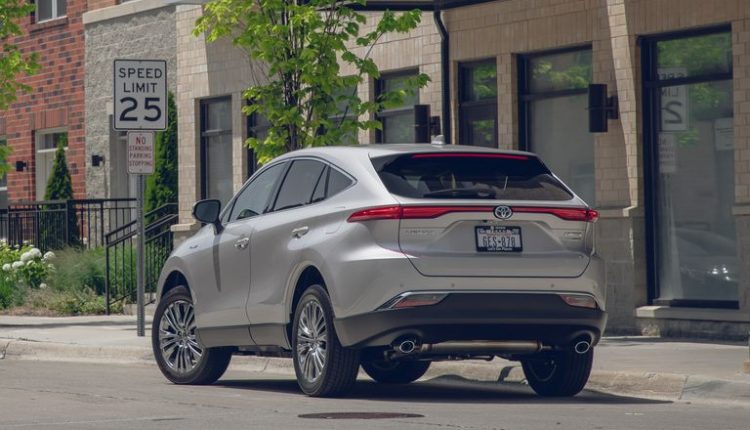 The new 2021 Venza slots between the compact RAV4 and the mid-size Highlander SUV in Toyota’s lineup. It’s based on the Harrier SUV that Toyota sells abroad, which we always thought would make a fine SUV for the North American market; apparently, Toyota agrees. Unlike the Harrier, which is sold with both hybrid and conventional non-hybrid powertrains, the U.S. market Venza is powered exclusively by a hybrid system. The sleek two-row Venza is a stylish choice among its boxier brethren, but it faces heady competition from the likes of the Hyundai Santa Fe, the Jeep Grand Cherokee, and the Nissan Murano.

The Venza is offered exclusively as a hybrid, powered by a setup comprised of a 2.5-liter four-cylinder gas engine and three electric motors which together develop 219 horsepower. All-wheel drive is standard: One of the electric motors powers the Venza’s rear wheels while the gasoline engine and the other two motors work to spin the fronts. During our test drive of the Venza, we found ourselves disappointed by its driving dynamics and it didn’t deliver the smooth and even ride that we expected. At our test track, its acceleration was also mediocre at 7.6-seconds to 60 mph, putting it 1.5-seconds off the pace set by the Honda Passport.

The EPA estimates that the Venza will deliver 40 mpg city and 37 mpg highway, which is almost double the ratings of other two-row mid-size SUVs such as the Passport and the Ford Edge. On our 75-mph highway fuel economy test route, we recorded 36 mpg.

Based on its dimensions, we expected the Venza’s cabin to be slightly roomier than the smaller RAV4’s in terms of spaciousness, but in reality, we found the Venza slightly less roomy. Not only is passenger space tighter here than in the RAV4, cargo capacity suffers as well, although most buyers will find it perfectly adequate. We fit seven carry-on suitcases behind the rear seat and 18 in total with the rear seats folded, versus 10 and 22 for the RAV4. The Venza is the first Toyota to offer the optional electrochromic panoramic sunroof that the company calls Star Gaze. With the flip of a switch, the sunroof’s glass panels go from transparent to opaque; this impressive feature is something we’ve only found until now on luxury cars such as the Mercedes-Benz SL-class

An 8.0-inch touchscreen is standard on the Venza and stands proudly atop the SUV’s dashboard; a larger 12.3-inch display is optional on the XLE and standard on the Limited. No matter which display is chosen, Apple CarPlay, Android Auto, and Amazon Alexa connectivity are all standard, as well as SiriusXM satellite radio. Upgrading to the larger of the two displays also unlocks in-dash navigation and adds a nine-speaker JBL premium stereo system.

The National Highway Traffic Safety Administration (NHTSA) has given the Venza a five-star safety rating and the Insurance Institute for Highway Safety (IIHS) awarded it a Top Safety Pick. On top of that, Toyota is including a suite of driver-assistance features as standard on all models. Key safety features include:

Toyota’s warranty coverage is fairly standard when compared with other mainstream brands, but it sweetens the deal with two years of complimentary scheduled maintenance. The Venza’s hybrid components will be covered by a special 8 year/100,000mile warranty, and the battery is covered for 10 years or 150,000 miles.

Beating the system and why we need to learn how to think.