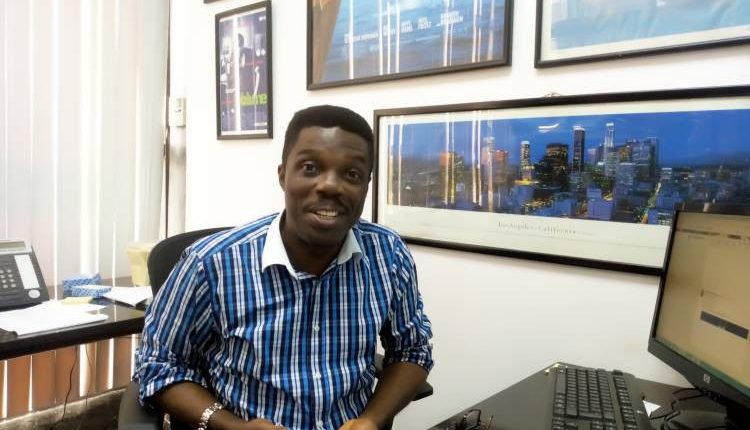 1.    Tell us about yourself and how did you get into sportscasting?

Long story. In short, I didn’t specialize in the sporting aspect of broadcasting, really, until seven years ago (2010). In all, I’ve been a broadcaster for 23 years now, starting even before I got into the university. I got bored with general broadcast after over a decade of disc jockeying, music presentation, talk-show hosting, news reading… all that. Well, sports presented a new challenge, so I took it.

However, I don’t enjoy the routine. Kills me. Conventional local sports presentation never held my interest. So I set about it in a whole new direction. I have thoroughly enjoyed myself hence.

2.     What’s integral to the work of a Sportscaster and what role do you have in society?

The successful sportscaster is the one who delivers entertaining sporting information, not merely by downloading piles and piles and information, most of which are readily available through multiple sources anyway. You have to be the bridge between the game, its players, its administrators and, most importantly, its followers. If sports give the society something to cheer, chant, shout and laugh about, you have to be a fun conductor in that grand orchestra.

3.    How do you rate the development of sports in Nigeria? Do you think the government or the private sector is giving enough support?

Sad to say, it’s been a painfully slow crawl. A classic tale of taking two steps backward for every step forward. You can scarcely find any other country to compare with Nigeria’s never-ending vacillation, half measures and empty talk as regards sports; as is true, you may agree, of almost every other facet of our national existence.

Is the government doing enough? Let’s get them to even start by doing something. Anything.

I must note, however, that it’s not necessarily up to a nation’s government to propel sporting success. Theirs is often merely to provide the enabling environment for private-sector participation to thrive. Unfortunately, that environment doesn’t exist. Worse still, the private sector has yet to fully comprehend the true potential of the sports sector.

We are still trying to get to the farm while the rest of the world has been to the moon, returned, and are now crisscrossing multiple frontiers in space.
4.    What is the concept and vision behind the brand “FEMI & THE GANG?”

Like I said earlier, the routine is a major turn off for me. And our laid-back, sit-down-and-talk-and-talk sports presentation style has never been my thing. When I set about putting together a sports presentation team, my major fixation was how to break from the norm and build a strong brand. I had the good fortune of testing out my ideas over a six-month period on secondment to our Cool FM station in Port Harcourt (2010) and I was privileged to have some of the nation’s finest on that initial team, notably China Acheru and Carl Orakwe.

On my return to set up the Lagos team, I was further blessed to have the likes of Leye Dada and Oma Akatugba on board as the new breed of special young chaps started trickling in to form the gang eventually.

Yes, there has been some turbulence along the way, and a few of that pioneer cast have since moved on, but I can proudly say that there has never been, may never be, a team like mine. Those guys, including the ones who’ve moved on, are among the best you’d find anywhere in the country, at least for now.

5.    When you started broadcasting, did you have any mentors and who are the top three people you have worked with?

Whoa! I grew up in Ibadan, so my earliest influences were some of the most amazing broadcasters whose voices thrilled me as a boy. I would be quick to mention Mr. Yanju Adegbite. One of the very finest and a firm favorite of my parents. In sports, I would never forget the direct training I got from Mr. Emeka Odikpo as well as the brotherly encouragement and tutelage I got from Mr shina Abimbola.

Generally, however, there’s an eternal place in my heart for Mrs. Folasade Ogedegbe (wife of the late Nigerian goalkeeper Best Ogedegbe), my boss when I was a naughty boy learning my trade. I’ll need an entire library to adequately extoll her virtues. Then there’s my professional father, uncle, teacher, friend; the late Mr. Bimbo Alagbe. I don’t want to cry.

Finally, when you’ve had the rare mentoring privilege that only a visionary like my current employer, Mr. Amin Moussalli can provide, you become invincible. Everything these last seven years have given me through the Cool FM family is down to that man. I hope somebody finds the technology to clone him quickly before his time is done. Five more of his kind and Nigeria will rule the world!

6.    What is the most challenging part of your job and how do you work it out?

That would be maintaining my privacy and staying out of the spotlight. Lol. I’m a very private person with classic family values and strong personal convictions. The last thing I want is to be unable to park the car, buy roast corn and chew away without somebody yelling “Femi!” or “Where’s the gang?” to shatter my solitude.

Happily, I have found a healthy way of pushing the guys on my team further into the spotlight to take most of the attention off me. Why three-year-old son used to shout “Femi & The Gang!” in the hearing of anyone who asked him to state his father’s name!

7.    Looking at the current state of the Super Eagles of Nigeria, How do you see them evolving in the next three years?

That’s tough to say. The good news is we are now beginning to see some bright young lads coming through. Experience has taught us, however, that having the right playing personnel (and we truly are still a rather long way from achieving that) is not enough. The will to do the right things and look beyond our oily noses and the short-sighted, fleeting ‘successes’ we tend, occasionally, to celebrate, has to be there.

We would continue in a frustrating cycle otherwise. And that’s if we are lucky!  Only a reckless gambler would anticipate a bumper harvest when nothing tangible has been sewn towards the achievement of that goal. I am no cynic, but, three years from now, we may be further adrift, if we continue in our now so firmly-entrenched trajectory.
8.    Who will you rate as the best Messi or Ronaldo and why?

I’m a Real Madrid and Christiano Ronaldo fan. It’s a privilege to have seen Ronaldo play such breathtaking football and break record after record after record. I also think he’s the more complete footballer in terms of his far better use of his weaker foot and overwhelming aerial abilities.

But there’s no beating Lionel Messi, I’m sorry. Where Ronaldo is perhaps the best human to play the game, Messi is an alien with superior intelligence and abilities. I’m actually quite suspicious that something was done somewhere to enhance that fellow’s abilities beyond mere mortal capabilities.

Don’t quote me though, I’m only trying out my lame comedic skills.

No one could ask for better fans and friends. Enjoy every game. But remember, that’s all it really is: a game. Not worth dying or fighting over. When the game ends, there will still be bills to pick up and relationships to tend. One game: football without violence. Please.

Litter and the Need to Keep Nigeria Clean

The Eyo festival and the significance of the Opambata staff

Creating a definite future for Nigerian youths through community-based initiatives…

The emergence and continuous growth of Sport Betting in Nigeria