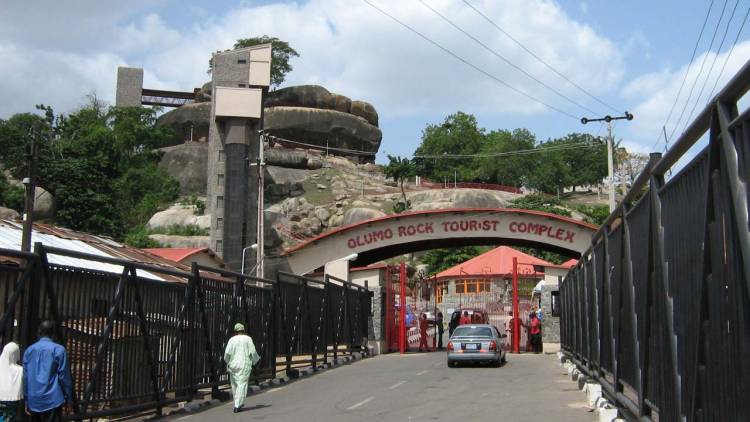 Olumo Rock is a popular tourist attraction in the city of Abeokuta, Ogun State, Nigeria. It is one of the most popular tourist destinations in Nigeria, West Africa and it sits in the ancient city center of Abeokuta – a name which means “Under the rock” it has a height of 137 meters above sea level.

Abeokuta was originally inhabited by the egba. People who found refuge at the Olumo rock during intertribal wars in the 19th century. The rock provided sanctuary to the people as well as a vantage point to monitor the enemy’s advance leading to eventual triumph in war. The town of Abeokuta eventually grew as these new settlers spread out from this location. Abeokuta is just about an hour’s drive from the bustling metropolitan city of Lagos providing convenient access to an array of hotels, restaurants, clubs, casinos and various nightlife activities.

Lagos is also home to the closest airport to Abeokuta, the Murtala Muhammed International Airport. Hotels in Abeokuta within minutes’ drive from the rock include Gateway Hotel and Olumo Guest House

New renovations completed early 2006 upgraded the infrastructure of the site to include a new museum, restaurants, water fountain and a The ancient Itoku market where local artisans and traders enjoy to haggle over price just as much as the customers like to find a bargain is just outside the Olumo rock premises and is a must-see.

The market is the center of the indigenous Abeokuta industry of tie-and-dye, locally known as adire. Adire crafters, usually women, both old and young show off their designs in sheds alongside the roads. Behind these sheds are buildings where many of these crafters live and work and their parents before them. In places where the plaster has cracked off the walls, you may see traces of the mud bricks used in the original construction. The locals are very friendly and if asked, will often give tourists and visitors informal tours of the dyeing processes. Other popular items to watch out for include local beads, bracelets, sculptures, and musical instruments like the sekere and talking drum.

A trip to Olumo rock usually commences with a climb up the man-made stairs carved into the rock. The journey continues with climbs on irregularly sized rocks (or ladders which are now provided) through a narrow corridor that leads to the top of the rock. All along the way, catch sights of carvings in the rock, cowrie-studded statues and the ancient abode of the priestesses who live in huts on the rock. Guides are available.

On the way back down the rock, the sight of the Ogun River running like a silver chain amidst a forest of aged red corrugated roofs bordered by thick green forests that melt into the horizon is breath-taking. 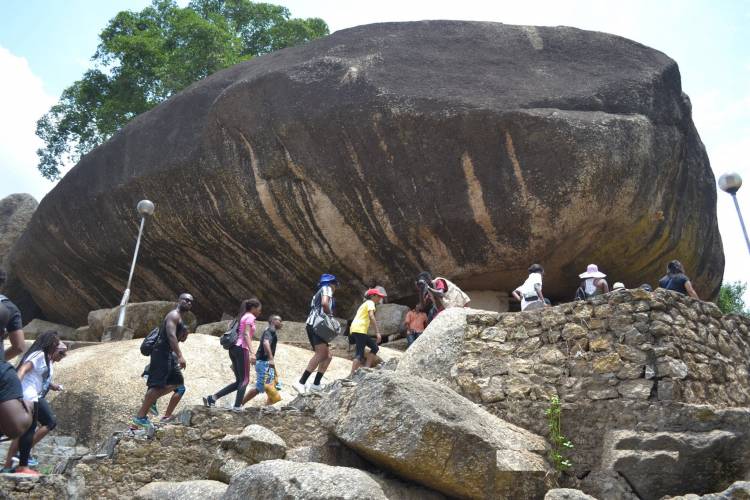 Things to do at Olumo Rock

Tourists who visit the Olumo Rock have several interesting activities they can engage themselves in, as a tour guide, who is versed in the history of the rock and the culture of the people, would be available to show you around the interesting places at this tourist location. The presence of the tour guide would make your adventure an unforgettable one, as almost every curl and turn at the rock tells a story. Thus, when you visit Olumo Rock start your adventure by climbing up the man-made stairs carved into the rock. While the use of the word ‘man-made’ may make it sound a bit easy, it leaves many breathless and ready to take a break to rest on the benches under the trees growing from the rock and enjoy some clean breeze.

Also, climb the uneven sized rocks on the narrow corridors leading to the peak of the rock. While climbing up the rock enjoy the sight of the cowrie studded statues, the carvings on the rock and bid greetings to the 131-year old priestesses (Iya Orisa) living under the rock. Do not forget to visit the ancient Itoku market which lies outside the Olumo Rock. This tye-and-dye (Adire) market is a commercial hub located around the Olumo Rock. It would be an interesting sight to see how the local artisans and traders dicker over price with customers, who are always looking to buy goods at the lowest price.

Also, take a tour of the new museum and relax at the recreational park, which is at the foot of the rock. Serenade your senses with nature’s beautiful scenery by going to the taking a peek at the Ogun River flowing down the rock. Let the water caress your skin with the soft therapy of Mother Nature. Maintain peace between the warring factions in the abdominal enclave by visiting the fast-food restaurant located at the base of Olumo Rock.

What is your data Vision? By Osaze Ezekiel