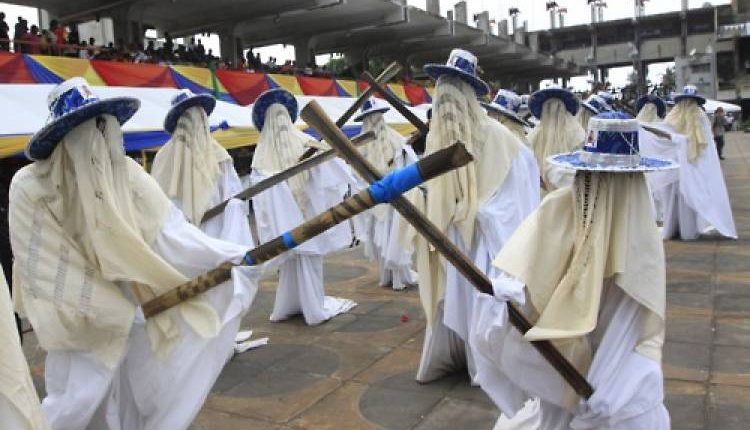 The Eyo festival and the significance of the Opambata staff

The Eyo Festival, also known as Adamu Orisa is a Yoruba festival unique to Lagos, Nigeria. Lagos is a well-known city that is full of life and fervor. It is a dichotomy between two parts: the Lagos Island and the Lagos Mainland with the indigenes mostly residing in Lagos Island. It is this crop of indigenes who celebrate the Eyo festival and, due to its history; it is traditionally performed on Lagos Island. Eyo is regarded as Lagosians’ most respected and iconic festival in the land.

The word “Eyo” also refers to the costumed dancers, known as the masquerades that come out during the festival and believed to represent spirits of the dead, attired in immaculate white regalia and holding a similarly white staff. Eyo Festival is a cultural symbolism that is well inculcated in the traditions and values of the people of Lagos. The Eyo festival is also be held to honour the death of a high chief or the installation of a new head of a palace. This festival is commonly held on a Saturday. On the fateful morning of this event; each Eyo emerges from a place (locally referred to as Iga) of a ruling family and goes to the shrine. The masquerade is adorned completely from head to toe, wearing a colourful hat, ‘Akete’, which depicts the colours of the palace of origin. A palace Eyo may have up to a hundred members moving in a procession from Idumota to the Iga Iduganan palace with much singing and dancing, giving the environment a true festival-like and colourful content. And when the Eyo comes in contact with people on the way, it welcomes them with the words, “E sunrunkunrun, we ma jagbon die!” translating, “Don’t fear anything, have a taste of the palm tree”, and pats the person with the palm branch on the shoulder. Upon receiving money, it says a prayer for the giver and sings a song of panegyrics.

Among the Yorubas, the indigenous religions have largely lost the greater majority of their traditional followers to Christianity and Islam. Be that as it may, the old festivals are still almost universally observed as tourist attractions which generate a lot of revenue for the government and small businesses around the Lagos Island venue of the Eyo festival. It is during these occasions that their traditional monarchs and nobles exercise the most of their residual power. The Eyo festival relevantly exhibits the culture of the indigenous people of the Lagos Island, popularly called Isale Eko.

There has a different perspective on how the Eyo evolved, there is a school of thought that explains the Eyo masquerade is not original to Lagos Island but was brought there sometimes around 1750 by two unnamed personalities from Ibefun and Ijebu communities in present-day Ogun State. Owing to the fascinating appeal, they succeeded in introducing it as part of interment rites of passage for the departing Oba at that time, Oba Ado who is believed to have married one of their cousins, Olugbani.

Another version has it that the main deity Adamu Orisha originated from Ibefun just as Eyo masquerade came as a result of the need to protect the deity from the activities of hooligans who might seek to destroy or steal it.

Those who hold this view say that the traditional iconic staff of the masquerade known as Opambata, was invented as part of the regalia for the purpose of warding off undesirable elements.

Since time immemorial, the festival as depicted by the image of a masquerade in flowing white apparel has grown from a rural festivity to an internationally acclaimed event, attracting both local and international tourists, even though the frequency of such festivities vary depending on who the Oba considers worthy of having such play staged in his/her honour.

Initially, five groups, different others have emerged, while participation in the play was restricted to family members of various individual Eyo groups of both the nuclear and extended family members, and any person or group of persons who have no filial link to any of the families can also join them for the purpose of the festival.

How to Look Great for Work -For Ladies